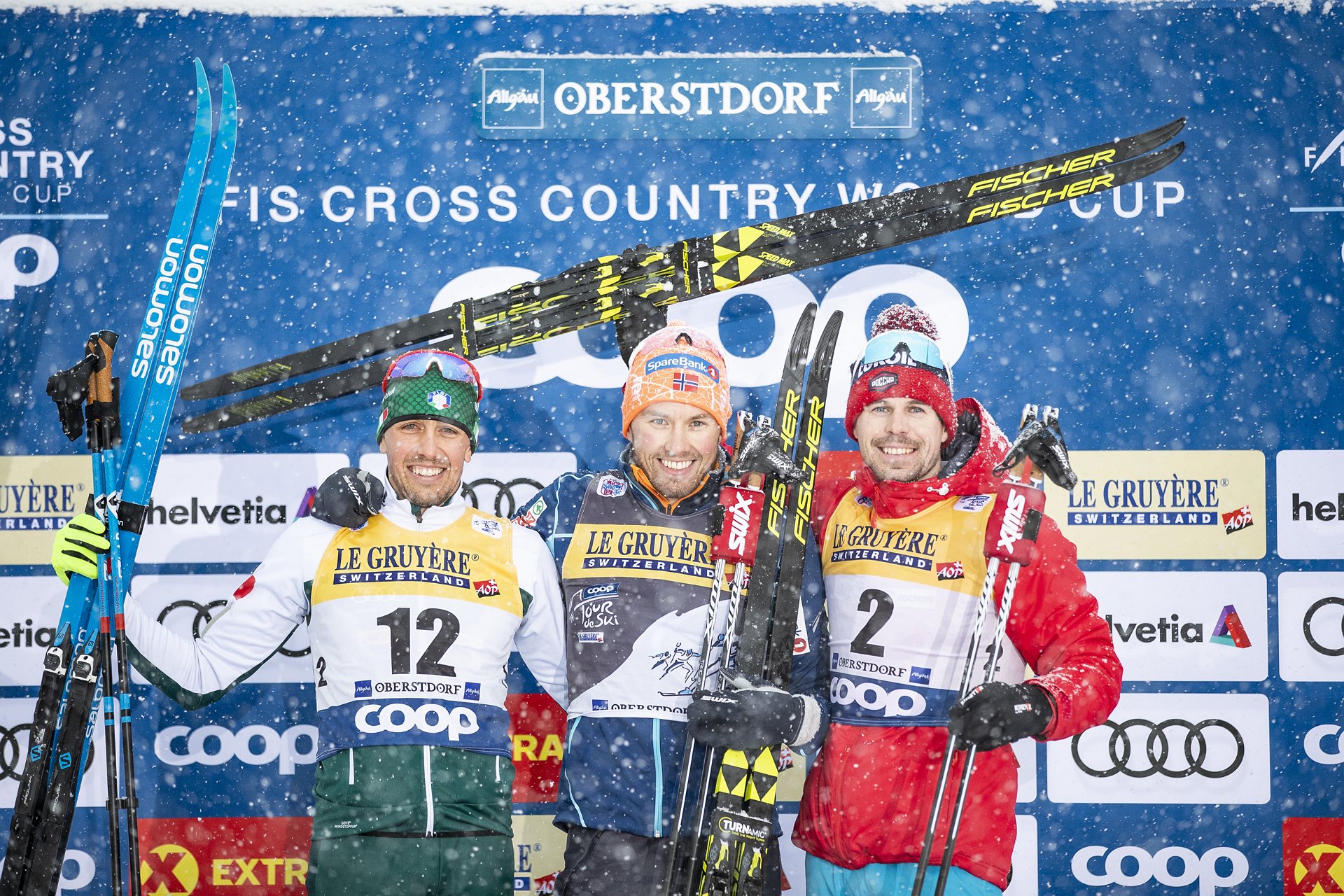 Wonderful second place at the Tour de Ski for the skier from Gressoney in the classic 15 km which took place in Germany. Only Iversen better than "Defast" in a selective and exciting race.

Oberstdorf, Germany – Jan. 2nd 2019  - He was among the most favorite contenders and did not disappoint his fans: Francesco De Fabiani finished second in the 15 km Oberstdorf classic technique, his favorite format and perhaps his favorite location.

Busy day in Germany for the fourth stage of the Tour de Ski due to the heavy snowfall that has become increasingly dense as the kilometers have gone by.

The race was made precisely in the final, De Fabiani responded to the powerful forcing of Emil Iversen and the two have disputed the victory in the last few meters with the Norwegian, the winner, and De Fabiani wonderful the second, at just 9 tenths, a trifle. Third place for Ustiugov, fourth for Roethe, fifth for Halfvarsson. In other words, the Olympus of XC-skiing.

For the representative of the Centro Sportivo Esercito di Courmayeur is the sixth podium in his career and is a result that brings him in the Top Ten of the Tour, more precisely in 9th place, 2 minutes away from the leader, the Norwegian Klaebo and 1’29” from the podium of the general classification.

«Oberstdorf is one of my favorite courses and as usual here the races are very often influenced by the weather, but the final climb and the descent towards the finish line are very suitable for my characteristics and this has made the difference – thundered De Fabiani – together with my skis that were perfect and performing».

And thinking of Oberstdorf, it must be said that in 1987 his father Giancarlo and his mother Floriana went to cheer for Marco Albarello on the day of the world championship triumph in 15 km; always in Oberstdorf Francesco had already obtained two podiums and, again, in 2021 the same location will host the World Championships.

The tactic of "DeFast" today was impeccable: «Let's say I saved as much as possible. The second lap was the hardest, I did not even feel so good, then things got better in the following laps. It was important to stay in the wake in the poling sections to avoid energy waste. Like 4 years ago, I would have had the strength to attack in the final climb, but I knew I would have paid. I kept calm and I'm very happy with the final result».

Tomorrow it will take place the free pursuit and De Fabiani has crystal clear ideas: «I will try to maintain the condition, looking especially at the next 15 km classic scheduled for Saturday in Val di Fiemme, and then try to close within the Top 10 of the GC of Tour de Ski».