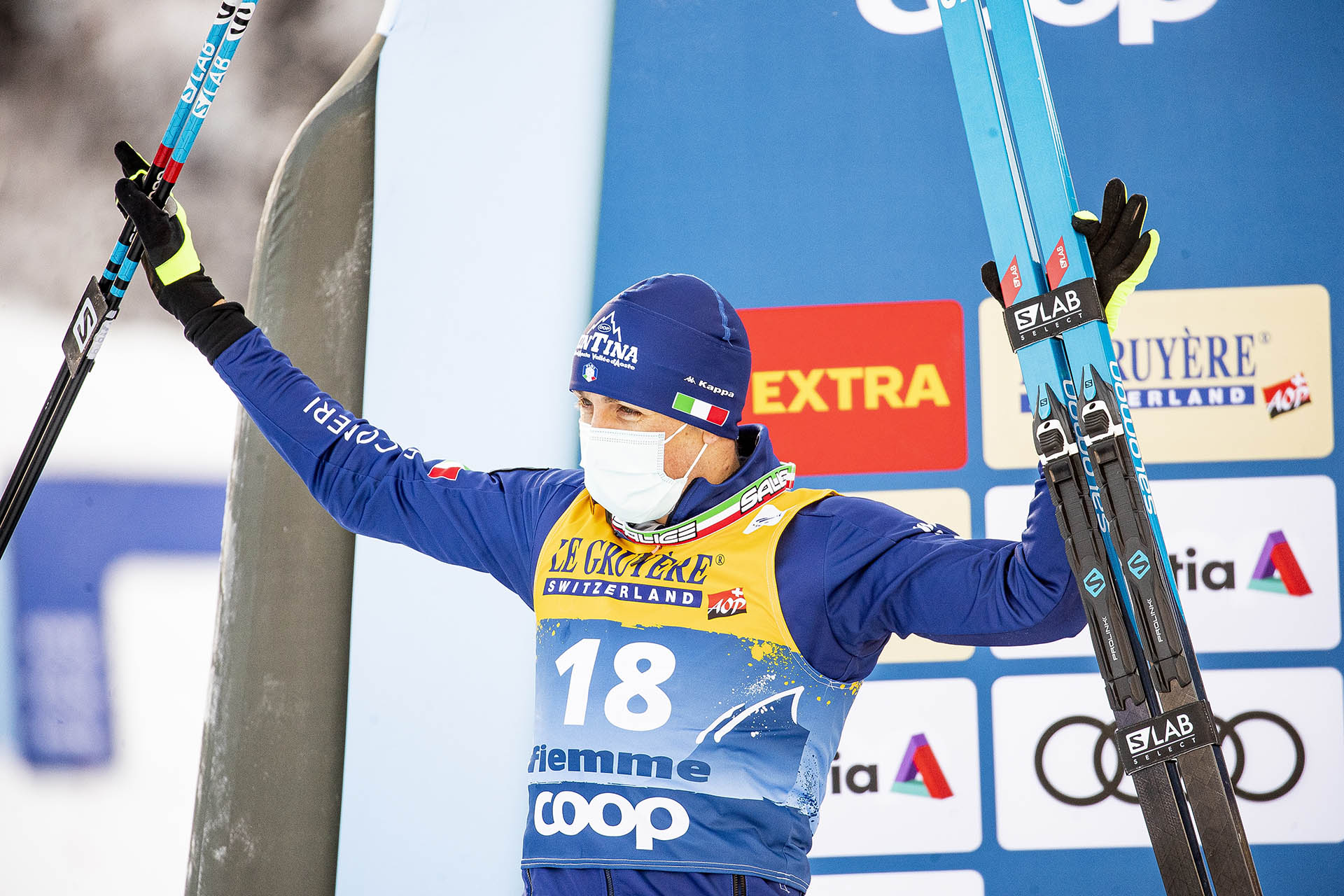 A stratospheric DeFast in "Val di Fiemme" shape, smoothes the climbs of the 15 km of Lago di Tesero and repeats the second place two years ago, yielding only to the Russian Alexander Bolshunov.

Lago di Tesero, Italy – Jan. 08th 2020 • The final weekend of the Tour de Ski 2021 in Trentino starts with a blast for Francesco De Fabiani. Defast, at the end of a crazy race, finished in second place, beaten by the leader Alexander Bolshunov in an exciting final sprint.

Not a great start in Val Müstair, the Tour had immediately seemed difficult for the guy from the Centro Sportivo Esercito of Courmayeur. The following stages in the South Tyrolean territory had not been positive in terms of results, but had given timid signs of improvement, not only technical, but also psychological, in the classic pursuit of Toblach.

And the improvement was clear, bordering on the incredible. Started very well, with his bib 18, De Fabiani has always been in the very first positions, ready to fight since the first of six laps in the finish area at Lago di Tesero. Motivated, powerful and gritty as ever, Defast has always fought like a lion and even tried firsthand, first in double poling, then alternately to shake off the powerful Russian Bolshunov.

The finale was exciting and similar to that of two years ago, when he showed up on the final straight in the company of Johannes H. Klæbo and had to settle for second place. The script was almost identical with a very fast Bolshunov able to beat Francesco in a heart-pounding rush. Third position for the other Russian, Alexey Chervotkin.

The performance, certainly the best of the last two years, allows the cross-country skier a substantial leap forward in the general classification of the Tour de Ski 2021.

«I am satisfied: – says a radiant De Fabiani – I needed a result like this! My Tour did not start as I hoped despite the sensations at the start were good. In Val Müstair I lost too much to keep aiming for the general classification. While at the end of the rounds in Dobbiaco, although the results were not exciting, I already felt better. Today I found that extra gear needed to stay in front, plus both the track and the race format were on my side today». And he adds: «I have no regrets for this second place. Two years ago maybe I had kept some energy at the beginning, but this time I put aside all tactics and opened the gas flat out, hoping to do the right thing. I also had excellent materials. Now let's see how I will be able to finish my Tour. I don't know what tomorrow's sprint will be like, but I hope to do well on Cermis».

The Tour de Ski continues tomorrow with the Sprint classic, again in Val di Fiemme, before the terrible Final Climb of the Cermis, the symbol of the Tour de Ski.